Well, I’m thirty.  I have officially begun my 31st year.  Physically here on this earth.

However, I had this picture in my head when I was younger of what a 30 year old was supposed to be.  Not necessarily a picture of whom or what would be in it, but just how it would feel.

Of course, 30 looks different for everyone.  Kids, no kids, married, single, divorced, widowed, remarried, living on your own, living with your parents, taking care of your parents or grandparents, going to school, not ever finishing school, finishing multiple degrees with many letters after your name, the list goes on.

Kenny and I got married young, both 24, both still in school, both not really sure what we were getting ourselves into, but jumping in feet first anyway.  We definitely had our fair share of trials and tribulations long before our marriage even started – previous (and failed) engagement, blended family, major surgery, and terminal illness, just to name a few.  Not to say that the marriage part was easy, but we had already faced these hard obstacles, what more could marriage change?

Anyone who is married or has been married knows that marriage is hard work.  (If you don’t know this, well, I’m telling you now – it’s hard work!) Even though Kenny and I were already making big, life-changing decisions pre-marriage, it just felt different when we were married.  We had to make decisions together and come to a common understanding if one of us disagreed.  Now, I’m not going to get off on some marriage tangent because that’s not what this post is about – it’s about turning 30 and where I wanted to be and where I am.  But I bring this topic up because there was one thing that we struggled with so much on agreeing and disagreeing with each other.  Babies.

For as long as I can remember, I always wanted to have children.  I never daydreamed about my wedding day, in a big white fairy princess dress, marrying Prince Charming.  Nope.  I daydreamed about holding a baby that I created with the person I loved and admired more than anyone in the whole world.  However, when I chose to marry Kenny, I knew I was taking a chance that that one dream may never come true.  But I had hope, as little as it may have been, that it may still happen.

When we got married, Kenny wanted to have a baby right away, but I knew I wanted to enjoy being a married couple for a few years before heading down that road.  Well, this plan was going well for awhile until those few years were up, and it was “time” to start trying to have a baby.  I had an internal struggle because I knew I wanted a baby so badly and I wanted one before I was 30.  But I also wasn’t 100% certain that I wanted one knowing that there was a very good chance I could lose his or her father in the future – near or far.  Again, I have a whole post dedicated to this topic so I won’t go into detail, but the fact that one of my specific “30” goals was to have a child or be pregnant seemed relevant for this post and I wanted to shine some light on it.

Obviously, I do not have a child (aside from Tank of course) and I’m okay with that.  I came to terms with that awhile back before Kenny passed away.  It’s not that I hoped I wouldn’t, but I had faith that the outcome would be what it needed to be – whatever that would be.  And I was okay with that.  I knew I had to take that pressure off of Kenny and off of me, more so, and that it was all going to be okay.

Was it hard coming to terms with this reality?  This reality that I never thought I would have to face in a million years.  Of course. It was very difficult.  But so freeing all at the same time.

Sometimes letting go of something you want so badly can be the freedom you need to give yourself to be able to enjoy the things you already have.

I have no idea what my 31st year has in store for me.  I have no idea if some of these “goals” I thought I had always wanted will still happen or if they are even still “goals” I want.  I have time to let those things figure themselves out.  I have hope and faith that my life will be all that it was planned to be and be more than I ever could have imagined, planned, or dreamt. 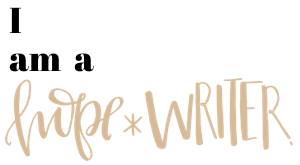